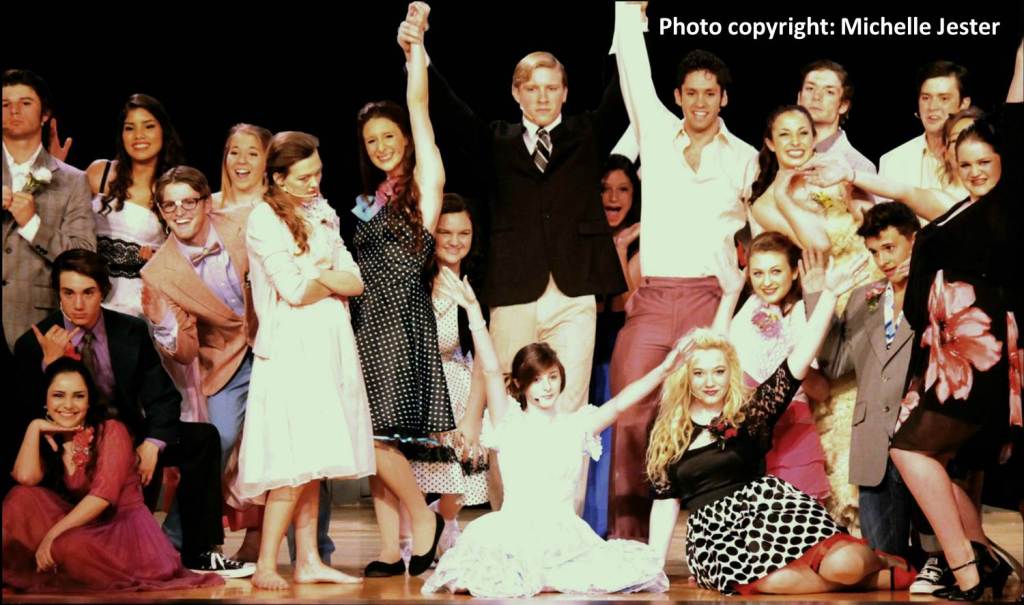 When my daughter’s high school theatre production ended a few weeks ago the director gathered all of the students in the theater afterwards to talk a bit before she dismissed them. And I was shocked by what many of them said, including my own daughter. During the practices and performances it was clear that the cast and crew got along well together. I’ve been around theatre for as long as I can remember and immediately noticed the main cast seemed to have a chemistry with one another that is rare. Even an acquaintance of mine that works at a large theatre organization commented on the chemistry she observed. However, that last night, after the final performance I felt like I was having flashbacks of the Breakfast Club and I realized, with shock, that personal social barriers in high school truly still do exist.

Right now you are probably saying something like, “Of course they still exist.” Or “How could you think they didn’t still exist.” But I’m not talking about cliques, defined by Social Sciences as normal human behavior where people tend to gravitate to one another and more intensely than other people in that same social setting. If I were talking about that then theatre group and parts of it would be considered cliques. While you can certainly stereotype a group which causes you to put up a social barrier, that’s not quite what I’m talking about either. Stereotyping which is defined in Social Sciences as a set belief which overgeneralizes a particular group or class of people. It never fails that when I see a nondescript van with no windows or a small window with a security screen in it, I whisper “serial killer” to whomever is around. And I admit freely that the driver of said vehicle couldn’t get my help under any circumstances. That’s a social barrier I’ve placed on myself through stereotyping. No helping serial killers or serial killer look alikes: that’s my motto. My daughter picks on me endlessly about that. Still stereotyping to form a social barrier isn’t what I’m talking about either.

My sister and I were best friends and I think looking back that maybe it kept me from seeing any type of barriers, if they existed, in high school. I knew our family name was ‘important’ but aside from that we were just the new people in a small town. Footloose was the movie of the summer. Go figure, right. This small town had a $1 movie theatre and it played Footloose all summer long. My sister and I must’ve seen that movie fifty times. Wendy and I were determined to be nice to everyone in this new school unless they gave us a reason not to be. It’s ironic that through the years some people say they never ‘talked’ to me because they were afraid I wouldn’t be nice to them.  Yet others, even as recent as this play, say they will never forget me saying hello to them in the hallway.

I’ve learned intentions are good but perception is everything. I also believe our own perceptions of ourselves are more destructive than other people’s perceptions of us. It’s the limits we place on ourselves that cause us more harm than the ones we let other people put on us. When we fear what our peers will think. When we over concern ourselves with what our parents will think. I’ve written about this before, we all care what someone thinks on some level. In one of my blog post titled “Cheating on my Husband” I say “It’s healthy to care on some levels. It’s also healthy to not care on some levels.”,  but I also say “The problem with caring what others think comes in if you are being dishonest to make them believe something about you that isn’t true.”  If you want to be friends with a certain person but chose not to be because of what others will think, then you are being dishonest with yourself. That’s the worst type of dishonesty and the most destructive. If you are drawn to try theatre but choose not to explore that because of what your friends will think or any other predetermined perception, you are cheating only yourself. If you live in fear of something through perception, yours or anyone else’s, and choose not to explore that something, then you may be missing out on one of the most important events in your life. That is what I call our personal social barriers.

I was determined to raise my kids to try to accept everyone, unless they give you a personal reason not to, because every single person has deficiencies. Either parents who don’t spend time with them. Or too much time with them. Breasts that are too small or large. Not smart enough. Not athletic enough. Introverted. Extroverted.  Too ugly. Too pretty. (Yes, being pretty is seen by many ‘pretty’ people as a deficiency in ways). Too cautious. Too carefree. Most people feel that whatever they are is whatever they see as deficient. I don’t have that mentality. I truly think I have a reverse. Either that or I’ve accepted myself for who/what I am way too well. However, that can also be a negative. Some think I’m overconfident. Some think I am arrogant. I’ve heard it all. However, to me it’s just me. I don’t see myself as too overweight, while in reality I could stand to lose a small person. I just don’t see myself that way. In the mirror I see a beautiful woman. Yes, of course over the years I didn’t apply my confidence in the best ways, mostly in my upper teen and young adult years. In retrospect I can’t believe some of the things I have done; as with anything though I had to find temperance.

That night, the night the production ended, I watched more in puzzlement than anything else, as several students got up to discuss their preconceived notions about one another or theatre before they got into the production together. And at how wrong many of them were. Just a few weeks prior to that night I took a portfolio for a young lady who is on the dance team at her college. Beautiful. A bit shy. Very thin and short. Many girls would think she seems perfect. But her view on it is the opposite. While taking her pictures she stated that she would do much better in life if she had the “right stuff”. “You know” she went on to explain “blonde, more muscular, had curves, outgoing, assertive, looks older… like Alexis”. 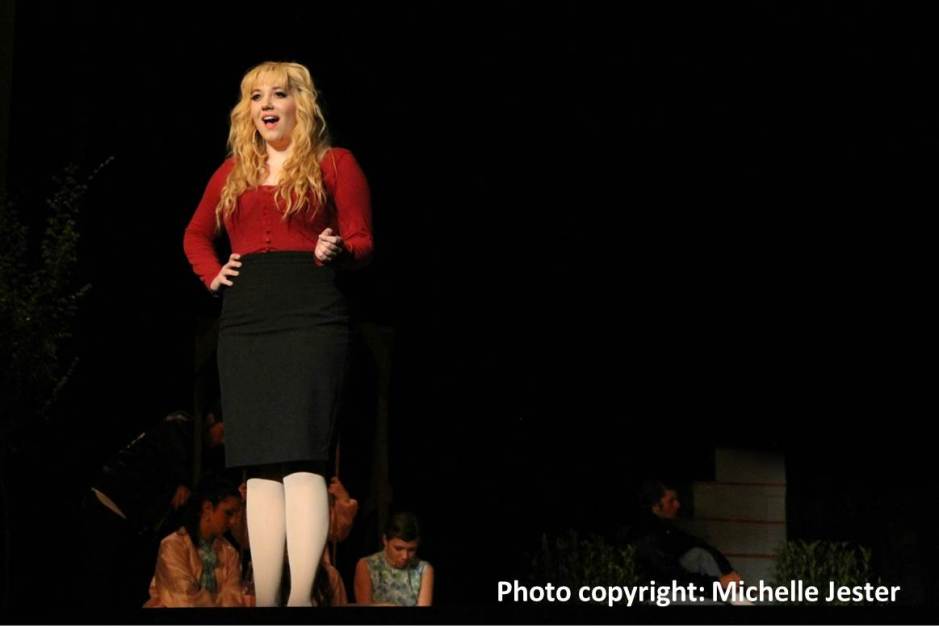 Then I heard my daughter’s words that night to the other kids she’s been involved with throughout this play, she said “Some of you will never talk to me again and I’m going to miss you.”

Wait, I thought to myself, did Alexis just say that? My Alexis? The girl who many in high school and everyone I know out of high school admires. She has friends of all ages all over the state, country and world. She never meets a stranger. She has amazing talent but doesn’t boast about it. She is beautiful but doesn’t see her full beauty. She’s abrasive at times but honest and true. She has the biggest, most amazing heart. She loves people! Truly loves people! I’ve never known my daughter, or my son for that matter, to have those barriers. They are friends with people who cross all social, ethnic, sexual, religious, and gender orientation, as well as social class. They don’t stop to take a socio-economic study on someone before they choose to talk to them.

And my eyes were truly opened to the personal social barriers we all place on our own lives.

I’m married to the most amazing man. He has been a great husband, father to our children, and friend through the years. If either of us had put a personal social barrier between us in high school we wouldn’t be here nearly 30 years later. I was pressured to not go out with 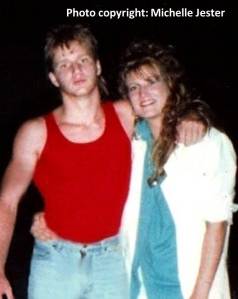 him. Was told it would never last, we were too different. He had friends upset with him for dating me and vice versa. We were both told by many that we were in different ‘cliques’ whether we wanted to believe it or not and it just wouldn’t work.

It wasn’t just our peers either. A memory we’ve recalled through the years was soon after my uncle retired as principal and we got a new principal and assistant principal at our school. The assistant principal called me into the office one day. While there he got my mother on the phone and proceeded to voice his concerns over who I was dating and why it was dangerous for me to be associated with him. I laugh every time I think of that memory. My parents LOVED Larry. So When I heard my mother talking rather loudly through the phone at him and his face pale, I laughed. I couldn’t help it. Soon my mother was there and after that session he had with her in his office behind closed doors, that everybody heard anyway, he never voiced that particular concern again.

I had assumed Alexis meant it would be the way it has always been when a play production ends; you think you are all going to stay close forever…but everyone tends to drift back into their ‘normal’ lives. And while you’ll have learned a little more about pre-judging people and activities’ and you may gain a few really good friends through the experience. But “No”, she refuted, “I meant we weren’t friends before and we probably won’t be friends after. It’s just the way it is. And it’s sad.”

Personal Social Barriers. They are our own choice. I don’t have many; however, I still have some. We all do. I just really thank God that I didn’t have the particular social barrier so many years ago that would’ve prevented me from marrying the most amazing man from a ‘different clique’. The man that many of my friends said our relationship would never last. That man and I have one of the best marriages I’ve ever known!

I know some of the friendships my daughter made will fade away. That’s natural and it’s ok. People go separate ways in life. I’m just glad to see that so far, several weeks later, Alexis and many of the others are still either talking, texting, Snapchatting, or hanging out. I look forward to seeing how this one plays out. I look forward to seeing if some of these kids, including my own, can overcome the barriers they place on themselves. Ironically, their play was Grease; a play about overcoming fears of rejection, breaking personal social barriers and following your heart.

I look forward to seeing if the way they perceive life would change at all. Because, while there will always be, there truly shouldn’t be anypersonal barriers that prevent us from following our hearts.

“There is no fear in love. But perfect love drives out fear, because fear has to do with punishment. The one who fears is not made perfect in love.” -1 John 4:18