On this day, the day before my debut novel is released to the world, I think back on the road that led me here. During the first serious conversation with a publisher, they all but insisted that I remove some of the God content in my novel. Another publisher, a 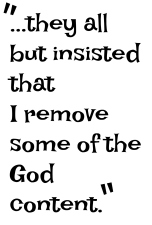 Christian one, strongly suggested that I remove some of the intense adult subject matter. I couldn’t change the circumstances that two publishers wanted different key elements removed from my book. I didn’t intend to self-publish, which is why I sent out many query letters, but self-publishing was never off the table for me. I’ve been involved with different aspects of publishing for many years, so I know a bit of the ins and outs of it. Going with a traditional publisher is always appealing, simply because of their vast resources. I’d also learned early on about the stigma and failure that often comes from the Indie author arena. While that

area of publishing is growing enormously and includes many successful authors, it unfortunately still has a bit of a black eye of sorts. I wanted to give my work the best possible chance it could have. However, needless to say, if I had taken out the God content or the intense adult subject matter, there would be no book left.

“The best chance your book has,” my husband said one day, “is to be what it is.” So, a year ago on June 19, 2016, I started the journey to self-publish my first novel, The Funeral Flower.

Through that journey I’ve thought often about another first: the first story I ever wrote. Matter of fact it was the first for-my-eyes-only full length story I ever finished. I was eleven. It was short, definitely less than 10,000 words and was about two young girls who attempted suicide together; one succeeded and the other didn’t. The one that died was free, free from pain and misery; the one that lived is left racked with pain and despair.

That girl goes through the following days planning the next time she’d attempt it. She

thinks of guns and pills, but those were hard to find and even if she did find pills, her luck she’d end up taking her mom’s hormone pills and simply grow an extra breast or something. She couldn’t drown or hang herself…tried.

Then, in the story enters boy.

Yes, omgosh, God forbid a boy comes in and saves the day. But, it’s my story so, it was a

boy. And that boy was nice. Now, I know psychologically why I made it a boy, so I’m happy with the boy. However, just to ease any independent feathers out there, it could very easily have been a dog (well without the strong contrast in comparison thing).  I, though, the eleven year old writer of said story, made it a boy. And that boy taught that girl about innocent love.

The girl who lived and the one who didn’t, start to both transform throughout the story. While the living becomes the free one, the other becomes the trapped one. The trapped one would never change any of her circumstances. She’ll carry all that pain and despair, she killed herself to escape, with her for eternity…left to wander around the earth by herself in a lonely existence. Her own prison, trapped because she never found the love that can free all the pain.

Yes, I know, eye rolls. It’s okay, I get that a lot. Rose colored glasses, shameless and hopeless romantic, joyful…I’m the annoying one. Ask any of my friends, family, colleagues and they will definitely agree. Deep down though, I’m tattered in places. We all are. Places people don’t see. However, I’m alive and free to use those places in good ways. I can change many of my own circumstances and I can try to help other people.

Still, I remember crying the whole time I wrote that story because those two girls represented me, an allegory of the transformation that I saw in myself at eleven, the one that died and the one that didn’t. The one that was trapped forever in circumstances she couldn’t change or the one who could change her own circumstance and use the bad in her life to try to help others.

I’m going to flashback to when I was just seven years old. I had a butter knife and I cut my wrists. It took a few times before I saw blood, but I remember vividly that it didn’t hurt as bad as I had expected it to. I also remember as soon as I saw blood, not knowing any better, I lay down and cried until I fell asleep.

I was devastated when I woke up the next morning and had to go to school knowing a boy there was going to beat me up again. He’d told me so the day before and I knew from experience he

wasn’t lying. I looked down at my wrists and could see the thin line of dried blood; however as soon as I washed my hands, barely even a line was visible. Even though my wrists were sore, there was hardly a physical trace of my actions the night before. I was only seven, so of course I had no idea how deep I would have had to cut to kill myself. I’d seen a few movies with people slitting their wrists and it didn’t look too difficult.

So, I went to school, got beat up, came home, mom called the school again, nothing happened again, except for the next morning when the assistant principal called me in to

tell me the same “boys will be boys” and “that’s how boys show they like you” so best to just “ignore it” speech. Same cycle. Even I, at the age of seven, knew that those boys were not showing me affection, but it does make you ponder just how often young women in the seventies, before and after for that matter, were told that also…and just how many of their psyches were embedded with it.

Now, some may hate that fictional story, the first story I ever wrote at the age of eleven, about the two girls who attempt suicide, or the true story of when I was just seven years old and attempted it myself. I also suspect some will hate my unrelated fictional debut novel, that comes out tomorrow, and that’s okay too. There will be people that mirror what those two publishers’ thought; either there is too much God or too much intense adult subject matter.

Either way, I’m free because I let the story be what it is. All the tattered places included.